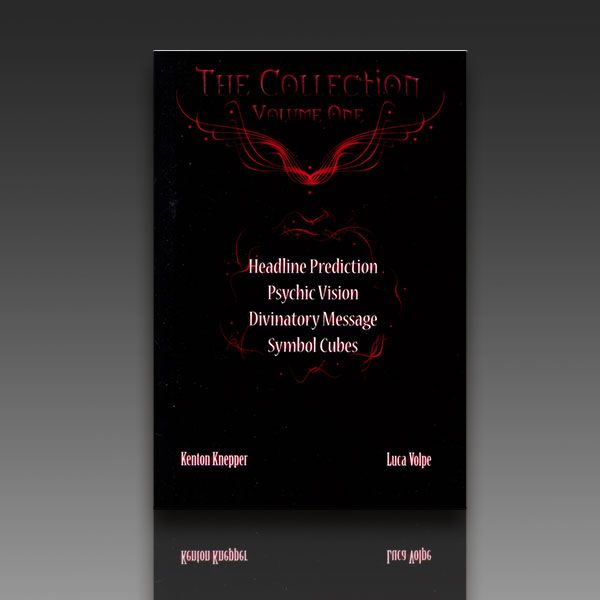 A collection of rare collaborative work between Luca Volpe and Kenton Knepper, including material only available in this volume. This material will make you appear to be a REAL mentalist, not just a trickster. This book is for people who want to be seen to legitimately read minds, make actual predictions, and assistant in creating positive futures for those fortunate enough to meet a real mentalist.

Psychic Vision
Psychic Vision combines psychological and readings principles turning them into a perfect prediction of someone's present and future as well as a little of their recent past. The prediction is so startling it gets prospective customers or people of interest to call you! Then you help this person change their future for the better. You predict details of someone's week, so it is entirely verifiable, and then make their lives better. That's why people keep coming back for more.

Divinatory Message
Simple, direct, and so believable you should save this for when you want people to believe real synchronicity is taking place. A person concentrates on an issue they are having and selects a message card from one of the popular divination decks. Incredibly, the message they take relates precisely to their issue, without any doubt whatsoever. They get a truly "guided" answer. This bit caused someone to believe in Kenton so much at a magic convention that they refused to believe he was performing an effect. A classic principle in magic is turned into realistic mentalism so easily, you'll wonder why you didn't think of doing this before.

Symbol Cubes
This has never been published. The only way you can get this effect and method is in this book. A set of popular toys or story cubes are shown and examined. A participant chooses a number of the images on the cubes and sets the rest aside. Instantly the performer is able to give a very accurate and astounding psychological reading without memorizing meanings, or having to guess at what to say. This system allows you to KNOW what to say, and you can rest assured of giving accurate and memorable readings of a psychological nature without hard work or memory. A highly visual, accurate and simple to do reading, without having to claim you are "psychic."